LG has just announced that it will unveil the update to its Pocket Photo wireless mobile photo printer at CES 2014 in early January. If you are confused about what we have just told you and you are thinking that this photo printer is already available in China, let us tell you that you aren’t at all wrong. Only a few Chinese costumers are aware of that and LG’s main goal is to extend its availability and show this amazing small product to the entire world. That’s exactly why they’ve chose the CES 2014 which will take place in Las Vegas! What better way could there be for announcing that LG Pocket Photo 2.0 will hit several international markets? We cannot think of any other one more inspired than this!

For those who don’t know, LG Pocket Photo 2.0 is even slimmer than its predecessor by 4 mm and has an improved battery life with 30 photos per charge. Things are also different when it comes to its printing resolution which has just been upped to 600 DPI, but you can only imagine that such a portable size such can print pictures only at 2×3 inches. 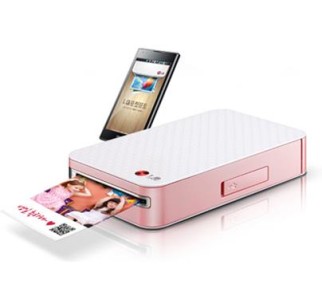 Even more, instead of using the usual ink or toner, LG Pocket Photo 2.0 comes with the innovative Zink printing technology that it is based exclusively on heat for activating the chemicals used in printing. And LG explains the decision of using this technology mainly thanks to the fact that it allows its printed images to last much longer than before, without any sort of risks.

The fact that it is compatible with Android, iOS and Windows mobile operating systems is another major advantage, as our source also confirms. And it works very easy with a downloadable app, letting you to edit the photos in the app, to add various filters, effects or frames, and then to send the image to the printer wirelessly via NFC and Bluetooth.

Finally, we can tell you that Pocket Photo 2 will first make its way to Korea in mid-January, shortly after CES 2014. If you are looking for a device that can offer you sharp wallet prints, we think that what we have just told you is more than enough to convince you that this wireless mobile photo printer could be an ideal choice. We’ll just come back with more details about its price, so let’s hope that it will fit into your budget!