We are all familiar with Huawei Ascend P6, a device which was released in June and managed to be a success as long as it has a full list of attractive technical specs. And now we finally have an official confirmation that Ascend P6 will receive the Android 4.4 KitKat update, although we must wait a while for that. The most recent Android update will be released no sooner than January and it also comes along with a new version of the company’s proprietary Emotion UI. If you don’t know, in this case, Android 4.2.2 Jelly Bean OS is running the show, but there is no reason to be worried about this aspect: Ascend P6 will skip Android 4.3 and move straight to the KitKat version that we are interested about.

So, what are you going to receive in about two months from now? We are talking about several major improvements among we can mention much bigger UI icons, new Hangouts SMS/MMS/Gtalks unified hub, new Email app, as well as new Phone app with nearby search. 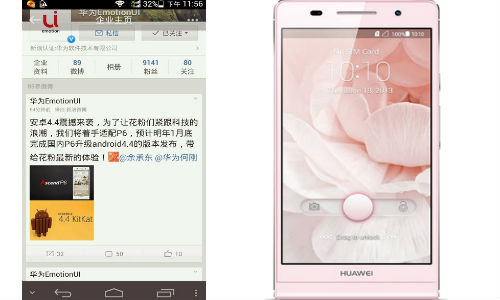 This Android 4.4 KitKat will be able to remove the widgets from the app drawer too, not to mention that it will bring Project Svelte UI optimizations. We have to admit that all these new features sound pretty tempting mixed up with what we are already having from this Ascend P6 device. Its multi touchscreen has a 4.7 inches diagonal and offers a displaying resolution of no less than 720 x 1280 pixels, while the power is provided by a quad core CPU at 1.5 GHz frequency.

And don’t forget about its 8 Megapixels camera which is equipped with LED Flash and a variety of useful image editing tools besides its video recording capability. So, there is no surprise to tell you about its 2 million pre-orders and the continuous current sales all over the world.