Android 4.4 KitKat Updates for HTC One Max and HTC One Mini Announced

We have all seen what a great job HTC has done when it comes to releasing the latest Android 4.4 update for its popular HTC One smartphone from all four carriers in the U.S. Both Verizon and Sprint versions have already received it and it is official that T-Mobile and AT&T will join the list in the near future as well, but what about HTC One Max and HTC One Mini owners? There are some KitKat plans for these Android devices as well that you should know about and the best part is that everyone can track the actual progress on HTC’s official software updates page.

HTC’s USA Product Team has also confirmed on Reddit that the Android 4.4 update along with their own Sense 5.5 version should reach both HTC One Max and HTC One Mini sooner than we are expecting. 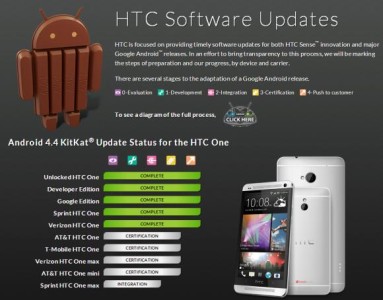 KitKat Plans for HTC One Max and HTC One Mini

To be more precise, we are supposed to receive the Android 4.4 KitKat update for the HTC One Max no later than this March, while the HTC One Mini should be getting the same update as early as April.

The same USA Product Team has offered us even more details on this topic, hinted that they are currently working on a new way for all owners of these HTC One devices that could give them the opportunity to directly load the update onto their handset, without waiting for each carrier to test and approve the KitKat update. Anyway, there is no guarantee that they have any chance to actually do such a thing as long as the idea is just under consideration for the moment, as our source has also mentioned.

We can only assure you that we’ll keep an eye on things and that we’ll inform you as soon as the company begins the KitKat roll out process for any of these two handsets. And then we’ll find out for sure if the team succeeded or not.