HTC One Released in Red in the UK

HTC One’s Glamor Red version is now available in the UK, through the exclusive retailer Phones4u, with a two-year contract with Vodafone, Orange, T-Mobile or EE. The monthly price starts from 31$. You don’t have the possibility of getting it off-contract, yet. The device comes with the same aluminum back as every HTC One, but in a different color. The company made big efforts in order to come up with a device that has the best build quality, software, screen and optics. There are, however, some bad parts, like Video Highlights which could be better implemented or BlinkFeed, which is useful, but underdeveloped.

Specs wise, the HTC One comes with a 4.7 inch SuperLCD 3 panel at 1920×1080 resolution, two front-facing BoomSound speakers and it’s running the latest Qualcomm Snapdragon 600 CPU – a quad-core chip at 1.7GHz – with 2GB of RAM and 32 or 64GB of storage. It runs with the help of a 2300mAh battery and Android 4.1.2 Jelly Bean with Sense 5. It supports 3G HSPA and 4G LTE, WiFi and GPS. A thing that you probably didn’t know is that the HTC One is one of the many new Android devices shipping with an integrated IR blaster, allowing it to control TVs, sound systems and cable boxes. According to our source, there is no saying on when the smartphone will be available outside the UK. 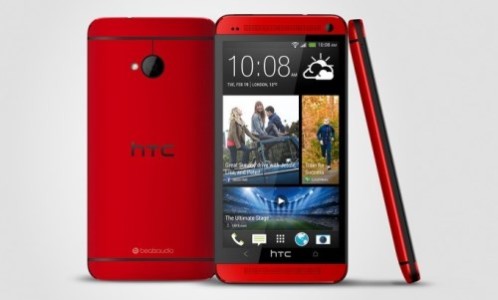 The HTC One features a 4MP UltraPixel camera with much larger pixels on the sensor itself. This, together with the f/2.0 aperture lens, is designed so that you can take great photos in both low-light and indoor. The HTC One also features a front-facing 2MP camera with wide angle lens, meaning you can fit more people in each shot. Plus the Glamor Red color for this particular model, which is hot at summer. Enjoy!