HTC One and HTC One Mini Vivid Blue Release Date

It’s official! Today, HTC announced the lovely color for the HTC One and the HTC One Mini. Both phones will be available in Vivid Blue color scheme – a color that is very fashionable in the past years. However, the company didn’t mention the retailers that are going to have access to HTC’s flagship smartphone, the One, although previous rumors were saying something about Verizon, then Sprint having exclusivity. The Mini will be available from AT&T. Both smartphones are said to appear in Q4 this year in the electric color scheme. As you can see from the photo below, the shade of blue is amazing and I can tell you it goes along perfectly with the white Beats Audio logo on the back.
The HTC One series handsets will also be getting the HTC BoomBass – a new sub-woofer for more power in your speakers. The HTC One was also released in red, weeks ago, but we believe this color will have a bigger success. The HTC One Mini was released in August, initially only in black or silver. So this is great news, especially for younger buyers who like being fashionable and cool. This week we’ll be getting all sort of information from IFA so we’ll let you know right away if we find out where you can buy the smartphones from. 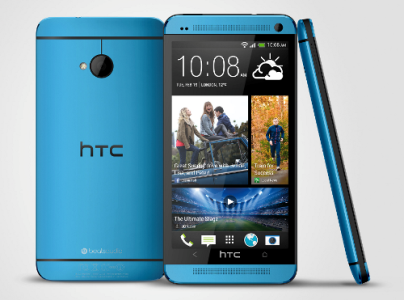 If you forgot the specs, we should tell you that the HTC One comes with a Qualcomm Snapdragon 600, quad-core, 1.7 GHz processor and a 2300 mAh battery, it is available in 32/64GB versions, with a MicroSD card slot and 2GB of RAM, while the One Mini holds 1GB of RAM, a Snapdragon 400 processor, a 4.3-inch 720p display, 16GB of internal storage, and a 4 UltraPixels camera. You can see more images of the Vivid Blue device by visiting our source. Enjoy!