Even if the Flappy Bird was launched in May last year, the game has become top of the list to reach millions of downloads every day. But right now, its own developer considered that the game went too far, reaching so many reviews and filling his bank-accounts so rapidly, that he thought it was high time he reached the end of it, without getting heart. So, Flappy Birds was recently pulled-off from the Apple and Android App Stores, due to its high dependency or nerve-racking.

With all that, if you still want to play this frustrating game – for some of you of course, which also includes me – and cannot find it on your Apple or Google Play Store, there is a way out there that lets you install the game manually and allow you to play it continuously until you drop…into your own bed, sure.

In this article, we will learn all about Flappy Bird, how to download the Flappy Bird APK on your computer and then transfer it to your smartphone to make use of its “fun” and “excitement” features. You will also learn how to get a high-score with the game and eventually tell us what you feel about it – as a homework, of course.

But before we start the serious part, we will give you an inside of the game that has made “millions of victims” worldwide. Don’t get me wrong, the game is catchy, it will catch you and won`t let you go. So, why don’t add some spicy on the meat to feed your dying heart. 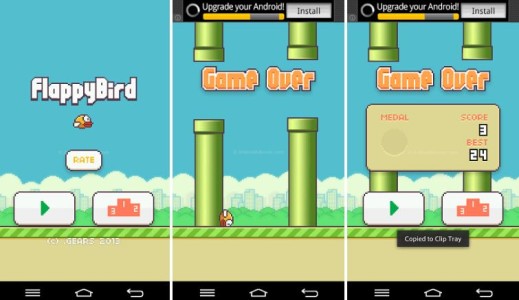 To begin with, Flappy Bird is that kind of game that “has left experts in deep thought”. It is the sort of 2D arcade game that rapidly gained its status of the most popular free game on both Android platform as well as on iOS, with such a well followed script that would make you crack in an instant if you are not patient enough to work your way through. Yet very simple, but still very hard to master.

The game does not has any special features, as it only incorporates 894K and enhances low quality in terms of graphics, but is the game with unlimited resources and with the ability of doing something that other games don’t do. But what is the magic that the game brings?

Well, you would definitely have to play it to understand what I am chippering about; put it from the start: the game is tricky, as it lets you try and try one single level, leaving you with only two choices: you get frustrated and throw your expensive smartphone or just laugh and figure it out how it goes. Simple, right?

Yes, right, to give you a hint, tap the screen until you know what`s the tapping about it, leave it or go on with it. There is tapping to make the bird fly, or to make the poor bird fell down; it is a simple yet complex system of tapping to avoid pipes and win medals (hard winning the Gold and very hard winning the Platinum medal). From now on, is your turn to decide whether to try it or forget about it, after reading this article.

Ok, we have seen how the tapping works, so beware.

To move things even further, the plot of the story revolves around the bird`s endless efforts of making its way through the hundreds of hurdles and pipes coming from one side to another, up and down as you struggle to keep the bird out of their way.

VERY IMPORTANT: make sure you pack yourself with a strong dosage of patience, as you will definitely need it. This is a recall for the so called gurus and expert guys bragging about handling the game. My opinion guys: this is no game to handle, it will make you rip off all your hair and clothes and throw away your phone.

In case you feel frustrated, just don’t forget to write your reviews like just the other thousands and thousands of people trying to get from one level to another one. This is perhaps the only solution to let your evil go out from inside.

Well folks, this is what makes this game so difficult, with its own innocence yet hard to play, low graphics 2D, just like the ones used to play back in the 90s.

All right then, if you still want to download the Flappy Bird APK, just hit our source link and install it on your desktop. Once you have installed the APK, there are some rules you should follow in order to better interact with the game; that wouldn’t be so difficult.

As our source also states, this is an external app, so you have to allow a third party app before installing the app from the APK.

Anyway, the rules are simple ones. Just make sure that once the APK is on your computer, make sure you connect it to your smartphone, using an USB cable. Once it is done, just copy the APK file on your device, as you can no longer download it directly from your Google Play Store.

Next on the rule list, locate the file with the APK and tap it; in case you are asked, allow Unknown Sources in Settings, then Security and finally Unknown Sources. Select Package Installer and follow the instructions for the installation and carry on with the process.

Now, the final steps would be opening the game from the App Drawer after the installation is done, and all you have to do know is get “Flapping” your bird now.

As already been told, don’t forget to do your homework and share your high scores with us. I have also provided you with a video on how to get high scores with Flappy Bird Game. Enjoy the ride and don’t forget to pause the game for a while. We wouldn’t want to be charged with “induced madness”. Just kidding! Waiting for your thoughts or suggestions!

Here is probably the highest score of Flappy Birds ever recorded. The video was posted on YouTube a few days ago and gathered over 3 million views. Seems like this guy knows what he’s doing. After all those pipes, it was about time for Mario to appear. And from all those mushrooms it seems like he forgat to be the hero!