CyanogenMod team has just prepared a surprise to all its fans that own a Galaxy Nexus 5 handset. We are referring to the Official CyanogenMod Case especially designed for this device by an enthusiast CM community member – Asher Simonds. Why this smartphone instead of any other one? Well, we can only guess that it has something to do with its personal preferences (maybe that’s his smartphone model), but we are hoping to see the story repeating for several other devices in the near future. Meanwhile, if you want to try it out, you can already place your order from Cruzerlite’s official online store.

Don’t forget that you can choose from four different color options: teal, clear, smoke, or black, just as we’d expect from the CM Team. They can help you express your own personality, by choosing the serious, yet elegant black or the teal shade which is more fun and full of live and energy. 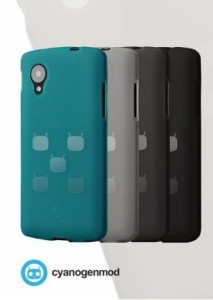 And there is no reason to be worried about their quality as long as their TPU material is well known for its properties such as transparency, elasticity, or abrasion. Even from the start the idea of having an abrasion resistant Nexus 5 Case which also has a very high degree of transparency and flexibility doesn’t sounds at all bad. And the CyanogenMod team reassures us that their case is not only able to offer us the daily protection that we need for our smartphone, but also comfort, as our source confirms.

This CyanogenMod case is supposed to be very easy to apply or remove, wrapping around your Nexus 5 without blocking any of its ports and buttons. So, would you be willing to pay $14.90 in order to have it? Let us tell you that this price is more than decent, especially that it comes with a 180 day warranty.