AOKP team has just finished incorporating the latest Android 4.4.2 version into their nightly builds, so we can finally announce you that the initially-supported devices list is more than generous as long as it covers several Nexus and Sony devices, as well as Samsung’s Galaxy S3 or S4 American model and even different versions of the HTC One smartphone. So, for the moment, the AOKP Android 4.4.2 Firmware is compatible with Nexus 4, Nexus 5, Nexus 7 (2013), Nexus 10, as well as Galaxy Nexus (Verizon and GSM versions), Galaxy S 3 (ATT, Verizon, T-Mo, USC), Galaxy S 4 (Sprint, T-Mo, USC, Verizon), Galaxy Note 2 (ATT, T-Mo, LTE-Intl.), Xperia Z, Xperia ZL, Xperia T, Xperia V and HTC One (ATT, Sprint, T-Mo, Intl.Verizon). If you haven’t funded your device here there is no reason to be worried about that as long as this list will probably be expanded over the coming weeks. But for those who own a Nexus 4 device, here we are to help you update it with the latest AOKP Android 4.4.2 Firmware.

We want you to be able to download and flash the latest nightly build with no trouble, so we must tell you from the start that you have to review all the risks that you are assuming by following this procedure. 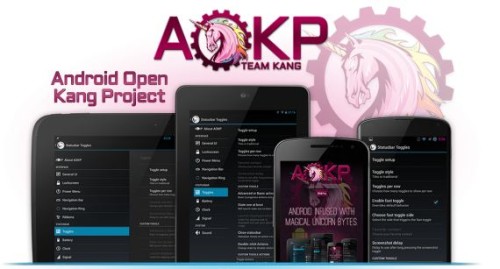 How to update your Nexus 4 with AOKP Android 4.4.2 Firmware (for both CWM and TWRP users):

We all know that Nexus 4 comes with impressive specs that are making it more than capable to run Android 4.4.2 KitKat smoothly, so it will be a delight to enjoy all the new features offered by this AOKP Firmware including redesigned Quickoffice NFC emulation, 14% less memory usage, Core System Processes Trimmed, Screen Recording, Google Wallet for everyone, Full-screen Immersive mode, Phone dialer with local business detection and more.

And you shouldn’t be worried in case your Nexus 4 gets stuck at logo while rebooting; a factory reset will immediately put an end to this small problem.