The current Google Nexus 5 is available in both black and white options, that’s no secret! But we all know that the modern consumer wants something more than that, something which can make him feel special and perfectly comfortable with the device that he is buying. Do you think that red can do that? We are asking you that as long as this Nexus 5 that we are talking about might actually come in a red coat, as it has already been spotted in some leaked photos from Twitter. Although we have no official confirmation regarding the existence of such a new version, we can only tell you that these photos seem authentic to us, following the usual Nexus pattern.

To be more specific, exactly as the white model, this Nexus 5 red variant that we have here has this new color all over the back excepting for the Nexus logo, as well as black on the front with a red dot on the speaker grille. 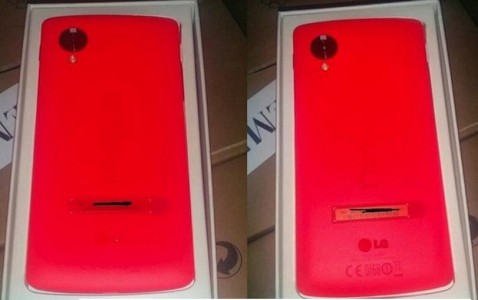 Besides that, we already know that both its previous versions have different textures on the back, so we wouldn’t be that surprised if the story repeats in this case too. And from what we can see in this photo, there are big chances for this Red Nexus 5 version to look more like the white version given the fact that we have no clue regarding a possible matte rubbery finish as the one already found on the black version.

As for those ready to tell us that a red Nexus 5 case has been available from the Play Store for a few months now, we can only tell them that we already know about that. Despite of the fact that we can generally find different cases and covers to suit even our most unusual tastes, they cannot match the feeling of having the handset in your preferred color right out of the box.

So, let’s just hope that these leaked photos will turn out to be true and the Red Google Nexus 5 is actually on its way. We’ll be back with fresh details, so stay tuned!