In the last few months Samsung has worked on a LTE-capable successor for its Galaxy Core handset that was introduced in the first half of last year. As you can already see from our title, this device is simply known as Galaxy Core LTE (having the model number SM-G386F) and we can finally tell you that it has been made official by its manufacturer. Coming as an improved version of the original Galaxy Core, we are wondering if it has any chance to become as popular as the initial version in certain developing markets.

Galaxy Core LTE is supposed to come with a 4.5-inch qHD TFT display with a resolution of 540×960 pixels, also getting its power from a 1.2GHZ dual-core processor paired with 1GB RAM and only 8GB of internal memory; but at least this number can be expanded by using a microSD card up to 64GB. 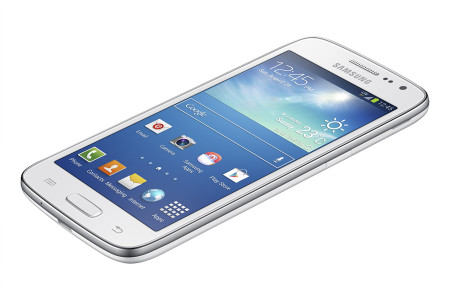 Other specs also include a 5MP rear camera with LED flash and 720p video recording, as well as a VGA front-facing snapper; and don’t forget that Samsung Galaxy Core LTE is supposed to come with Android 4.2.2 Jelly Bean out of box. We are sure that many of you are dreaming of the most recent KitKat version, but your wish won’t come true by buying this handset which screams ‘entry-level’ and that might not ever see an update.

From what it was previously rumored, this Galaxy Core LTE device is supposed to be released in week 11 of this year (March), but we still have no official confirmation for that. And its availability will also be limited by taking in consideration that the Bluetooth SIG lists this handset as being made especially for Europe; but besides this listing, we have also spotted the same Galaxy Core LTE on several Chinese websites, so we believe that there are big chances to become available through China Mobile, as well as in some select countries in Asia.

As for its price, let’s remember that the first Galaxy Core version is modestly priced at $200 with no contract included, so it is more than likely for its successor to be an affordable one as well.