China Telecom will soon be receiving a new Samsung smartphone on shelves. The device will be a flip-phone, meaning it will have two screens (one when it is closed, an the other on the interior) and will feature a quad-core processor. We have no idea yet if the headphone will hit any other regions, but the information just leaked via Samsung fan site Sammy Hub, so perhaps we’ll be hearing more about the device in the future. From the images, the smartphone looks quite attractive. We also have some specs which we’ll talk later about, in order for you to make an impression.
Just a week ago, we were telling you about another flip-phone from Samsung. It appears like the company decided not to release any more devices that look the same with those from other mobile companies, and thought of getting the flip model back on the market, which is a pretty awesome idea. As our source states, the device will support both CDMA and GSM networks. As for the internals, the Samsung W789 “Hennessy” (this appears to be the name of the upcoming device) will sport a quad-core 1.2GHz processor (probably a Snapdragon 200), 1GB of RAM, two 3.3-inch HVGA displays with 320 x 480 resolution, a 5MP camera, microSD card support and will be running Android 4.1. 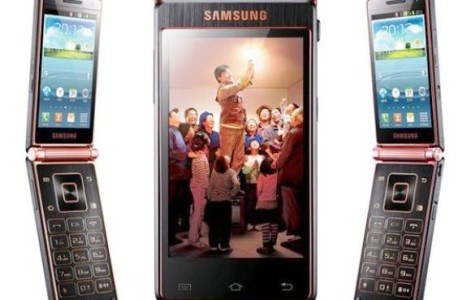 As you can see from the images above, the Samsung W789 Hennessy has a special maroon red color with bronze accents. It will feature dual-sim support. On the other hand, the Samsung Galaxy Folder might have been just a rumor. Anyway, I was telling you, in the article on the Folder, that I’m quite interested in going back to this model, I guess it’s something about that flip that makes me nostalgic and gets me thinking of my old pink Motorola V3.