LG has just announced that its new G Flex will be available in the U.S. for pre-order both online or at AT&T stores beginning January 24, right after Sprint also announced us that that the handset would be available for pre-order on January 31. So, if we are taking this sort of competition seriously, we might say that AT&T has obviously beaten the other popular carrier, but there is something else than we care more about. We are talking about the included technical specs and the price which could bring us a step closer to actually having it on our hands (or at least a good pricing option is what we tend to dream of for the moment).

We can tell you from the start that its curved, flexible design is supposed to fit perfectly in the palm of your hand, being not only easy to hold, but also very easy to use. 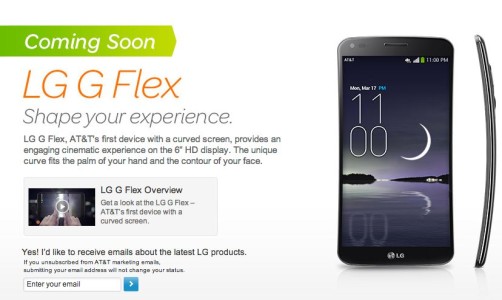 LG G Flex also comes with an expansive 6-inch HD OLED curved display with a resolution of 1280×720 pixels which can offer an impressive viewing experience. Even more, the QuickTheater features offers you the fastest access to your photos or videos from the lock screen with a dragging gesture, not to mention the Dual Window feature that can easily split the 6-inch screen into two different applications. And yes, we know what you are thinking of and we can confirm you the fact that we are actually talking about the first curved display phone that’s going to be soon available in the U.S. Anyway, we are sure that more are about to come as long as the public has reacted so well to these curved displays, both in smartphones and other gadgets.

When it comes to the power of this LG G Flex handset, it is offered by a Qualcomm Snapdragon 800 processor with quad-core Krait CPU, as our source confirms; and although it packs only 2GB RAM, you can easily expand it up to 32 GB onboard memory, so this thing shouldn’t be too much of a problem. As for the OS, it unfortunately runs only on Android Jelly Bean 4.2.2, but we can already predict that this aspect is about to change in the near future.