iPhone 6 To Come with a Bigger Screen

Last year, Apple has offered us more than we could have asked for: we have received the popular iPad Air along with iPad Mini with Retina Display, iPhone 5s and iOS 7, but now, that 2014 has arrived, it’s time for new products to be revealed. There is no mystery that Apple has been much slower than several other manufacturers when it comes to working on a smartphone with a display of five inches or greater, but things are about to change. The company has suddenly decided to take in consideration the so called phablet trend, so the one thing that everyone seems to agree on when it comes to its upcoming iPhone 6 is that it will have a bigger screen than any other previous version.

The current “large screen” market includes several other devices such as HTC One, Sony Xperia Z, Samsung Galaxy S4 and more and by simply taking in consideration their popularity, it makes perfect sense for Apple to hope for a similar (if not even better) reaction from all potential buyers out there. 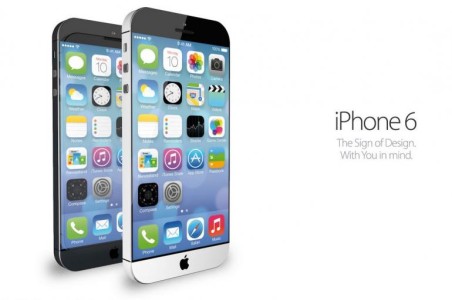 iPhone 6 To Come with a Bigger Screen

But if you want to know for sure how big this screen will be, we must remain honest and tell you that it’s pretty difficult to be sure of that, at least at this point. Previous rumours suggested the possibility of having an a 4.8-inch screen iPhone 6, while the most recent ones have changed towards a 5-inch screen. For example, the Japanese tech publication MacFun has already mentioned the existence of a 5-inch screen having a Full HD resolution of 1,920×1,080 pixels, but only if things would be that easy.

The Wall Street Journal wants us to believe that there’s more in this story that we don’t know about as long as Apple is working to release not one, but actually two iPhone models with bigger screens. We must admit that these phablets have become increasingly popular in the smartphone market and the possibility of having the chance to choose between both a 4.5-inch version and a 5-inch one is exciting for the moment, but you shoult not get your hopes too high.

The final version is yet to be revealed, so things could easily change in the blink of a second. We can only promise you to keep an eye on things and let you know if anything new appears.