The iPad 5 is expected to arrive by the end of the year 2013 (the exact release date isn’t known for sure), with whole new specs and a lot of differences from previous iPad generations. Rumors say that the device will look exactly like the iPad Mini, only with a 9.7-inch Retina display and that it will have a anodized aluminum shell, also like the Mini. The iPad 5 is also said to come with a smaller battery, which will lead to thicker apparel and a lower weight. Furthermore, the device will probably be shorter and thinner than the iPad 4, but you’ll get to see it for yourselves in the leaked images below.

Specs wise, we couldn’t find out very much about the iPad 5, but you’ll get to enjoy all the features of iOS 7. The device is considered to come with a more powerful iSight rear camera and may possibly have an A7 chip (just like the iPhone 5S), as our source points out. Other sources suggest that the iPad 5 may come with a faster processor and new color options (slate – as offered on the iPad mini), gold and grey. The price tag will probably be around 399£ in the UK, but that’s just a guess. 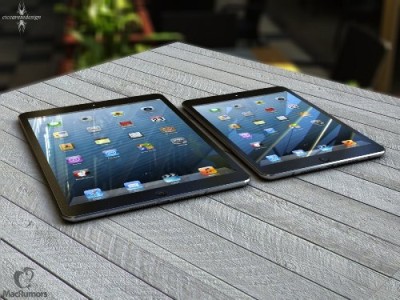 The iPad 5 may be released with an original Apple joypad, according to Pocket Gamer, but that’s not all. The best rumor yet is that the device might be charged wireless, by simply closing the cover, in which Apple is trying to introduce induction coils. Now that would be a revolutionary thing! Can’t wait to get my hands on it! Don’t you?