Alcatel just announced a new smartphone at IFA in Berlin. It’s a 4.7-inch device with aluminum body, called Alcatel One Touch Idol Alpha. The phone is pretty impressive with decent to high-end specs and features, having both the top and bottom protected by a aluminum frame, which will light up whenever you have notifications, charge your phone or take video recordings. This might give it a little bit too much light and attract curious looks, though the release date is highly expected by all of us. Also, I consider the name is too long, but you might want to give it a shorter nickname when speaking of it, like Alcatel Alpha or something like that.

According to our source, the Alcatel One Touch Idol Alpha will feature Android 4.2.2 Jelly Bean OS, will have a a 4.7-inch edge-to-edge 720p HD display and a 1.2 GHz quad-core processor (probably a MediaTek CPU) and 2GB of RAM. The company also announced earlier this year the One Touch Idol X, Idol S and Idol Mini, so the Alpha is the 4th from the One Touch family. It is said to arrive in Q4 (starting October 2013, this being the rumored release date) and it might be available for a high price tag. It also sports a 12.1-megapixel rear camera with LED flash and can record full-HD videos. There is a 1.3-megapixel front-facing camera. The phone also includes 16GB of internal storage. 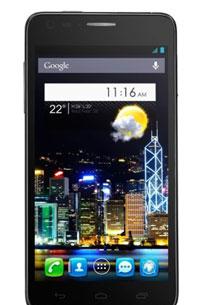 The new device comes with a 2000mAh battery and it’s a single SIM smartphone. So I guess it will be worth the big price that it’s speculated to have, considering the specs. Although a release date hasn’t been given yet, we’re hoping we’re just one month away from seeing the handset in stores. We’ll get back to you with hands-on conclusions.