First of all, I must tell you that the new Android, 4.4, will be called KitKat. Second, Google made a statue for the new version and, at its unveil yesterday, the Nexus 5 was spotted. The new LG smartphone hasn’t been officially unveiled yet, so, when realizing what happened, Google pulled the video from the statue’s unveil from the web. Speaking of the statue, we can tell you it is a very cute chocolate Android character, but you’ll see it all over the internet from now on. Google’s yard is full of such creatures, unveiled each time a new version of Android comes out.
Getting back to the Nexus 5, the video shows that a Google employee is holding the device. At least, that’s what we believe it to be. The device has impressive dimensions and a matte back. According to our source, the device will supposedly be powerful and will have about the same price as the Nexus 4. The Nexus 5 is similar to the LG G2, which was announced back in August, although the design looks like ASUS’s Nexus 7. We’re expecting specs like a 5.2-inch 1080p HD display, Snapdragon 800 quad-core at 2.3 GHz and 2GB of RAM, a 13 megapixel camera and a massive 3,000 mAh battery. 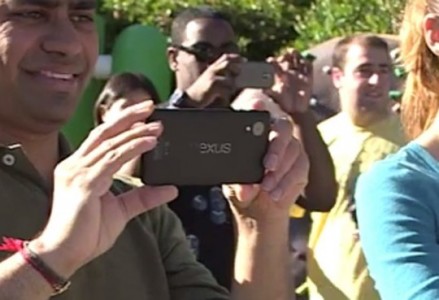 From the Google employee’s smile, we’re guessing the video recording is great. We’re quite interested in the specs, but most of all, of whether this is or not the new Nexus 5 and when will it be coming out on the market. Until then, we’ll let you watch the movie (yes, it was deleted by Google but we have our sources). Enjoy every moment of it!