If you remember, just a few days ago we have talked about the very same Android based smartphone that we have here. But now we can finally tell you that the handset has been released in Russia and some countries from Europe (including Austria, France or Spain) and in the Middle East as well. You probably already know that YotaPhone will become internationally available next year, so this aspect is no problem for all the potential buyers. As for the price, what do you think about paying €499? Some of you might not see it as a very affordable option, but more as one which tries to make an impression and wouldn’t pay so much for it, while other really believe that it has a great potential. But is it really capable of surprising you?

Its power is provided by a dual-core 1.5GHz Snapdragon S4 processor model, while the 4.3-inch 720p screen has a maximum 1280×720 screen resolution. But this display isn’t the only one that you are getting; all you have to do is flip the phone over and you’ll find a secondary 4.3-inch 360×640 e-paper display. 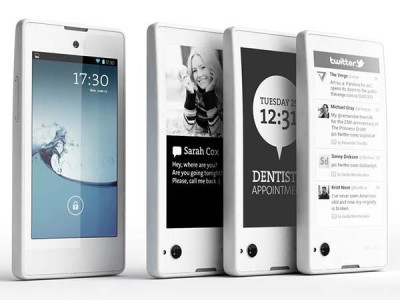 That’s exactly why this smartphone is also presented as a possible e-reader for those looking for such a product, the company guarantying us a pleasant reading experience. For those passionate about taking photos, this YotaPhone offers a reliable 13 megapixel autofocus rear camera which also comes along with a secondary 1 megapixel front-facing camera, according to our source.

So, are you curious to try a device which comes with both an e-ink screen and a regular screen? And more important, are you ready to pay €499 in order to have it or you think that other popular competitors are much worthy of your interest? The final decision is all yours.