If you are looking into buying a new Android based tablet then now it’s the perfect timing. As you know, during Computex all the major companies (Samsung, Acer, Asus and now Toshiba) unveiled their upcoming gadgets and since now we learned that new and impressive tablets will be released during the following weeks or months. Anyway, if you want even more possibilities, then check out the Toshiba Excite Write, Excite Pro or the Excite Pure, which have just been officially revealed. The tablets are coming with some impressive specs and features, so I do recommend you to read the following lines.

The first tablet to talk about is the Toshiba Excite Pro; this will be a high end Jelly Bean 4.2 powered handset as the specs and features list includes: 10 inch display (2560×1600 resolution), 8 MP camera, Harman Kardon-branded speaker setup, microUSB, microHDMI and microSD support, Nvidia Tegra 4 chipset and Android 4.2 above all. Actually, according to Toshiba, the Excite Write will be similar in performances with the Excite Pro (we will have the same specs spotted on both tablets) the only differences between the devices being in the features side, where the Excite Write comes with some dedicated tools like improved digitizer (1024 pressure points) and TruNote app. 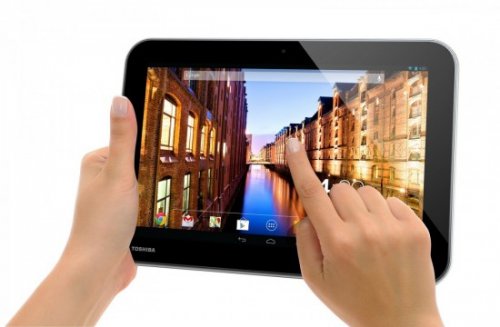 On the other hand, the Toshiba Excite Pure is a budget friendly version of the first two tablets; the handset is bringing the same 10 inch display, Android 4.2 Jelly Bean but only an Nvidia Tegra 3 chipset.

Unfortunately that’s all we could find out so far. There are no words about the tablets future price tags, or release dates, but we are expecting fresh news to be announced by Toshiba. Anyhow, what we know for sure is that Samsung, Asus and Acers is now having real competitors when it comes to the tablet area as the Excite Write, Excite Pro and Excite Pure are looking quite impressive.