After Sony surprised us with its high end Xperia Z (along with other high end Android based smartphones), now it seems that the company had returned to its old habits as the new Xperia M has been officially revealed. We are looking at a new budget friendly device that will be coming with decent (to low) specs and features though Jelly Bean 4.2 will be running above all. Now, if you want to learn more about the Sony Xperia M read the following lines as there are few things that might worth your attention.

As you can see in the image from below, the Xperia M is not looking bad especially if we count the 4 inch FWVGA display; maybe only a white flavor would have been a better choice, but who knows maybe a white variant will be released too. Anyhow, leaving aside the design (that’s not that relevant as everyone should consider the performances – we are talking about a JB 4.2 based smartphone) we should focus on the specs and features list. 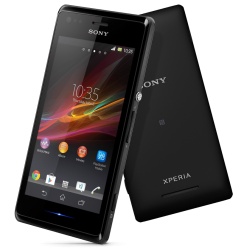 Well, the Xperia M will be coming with a dual core processor clocked at 1 GHz, 4 GB of internal storage, a micro SD card slot, a 4 inch touchscreen, a 5 MP camera on the back and the Android system with Jelly Bean pre-installed.

The aspects mentioned above are official ones, but that’s all; Sony didn’t offered further info related to the future market availability, pricing offers or the exact launch date so I guess that those interested in buying the Xperia M should wait until the official press release will be made official.