So far, Samsung did not offer many details regarding the rollout of Android 4.4 KitKat update for its flagships such as the Galaxy S4 and the Galaxy Note 3. However, French Carrier, SFR, has recently announced that both of these devices will get the well-awaited firmware update at the end of January and in early-February. In the same time, the carrier mentioned that it would offer the exact release date any time soon.

The updated firmware brings a couple of new features such as the translucent menu bar at the bottom of the screen, new dialer and caller ID, unified Hangouts messaging app, smarter Google Now integration, support for screen recording feature, step counter and detector, and much more. So far, the Korean Manufacturer uses its TouchWiz UI besides the Android OS, and the company needs to prepare other changes along with the update. 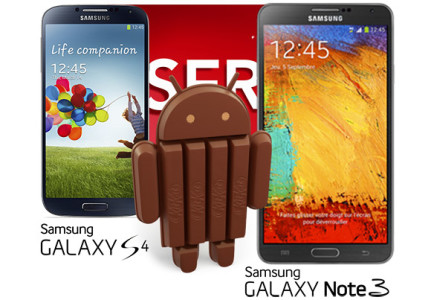 The smartphone manufacturer is still pushing the Android 4.3 Jelly Bean update for some of its devices in which the 2012 flagship Galaxy S3 is included, as well as some of its 2013 handsets, namely the Galaxy S4 and Galaxy Note 2. For those who keep waiting for the 4.3 update, here are some of its main features. The latest iteration of Jelly Bean will bring Gear Support for Samsung’s first wearable tech devices.

Back in November, Google and Samsung released the Android 4.4 KitKat update for the Samsung Galaxy S4 Google Play Edition, soon after other manufacturers such as HTC, decided to update their own Google Play editions.

In what concerns Samsung latest flagship, the Galaxy S4 is a special-case device. The device itself is offered into various versions, with some of them sporting an updated process and LTE-Advanced support. In addition, the Galaxy S4 has just received the Android 4.3 update while the Google Play Edition has reached the Android 4.4.2 KitKat update. In this case, it is expected that Samsung will take all of its devices one at a time, and the latest flagships will be a priority.

Keeping in mind the number of devices that have encountered different problems when upgrading to Android’s KitKat, and the fact that Samsung is still trying to rollout Android 4.3 Jelly Bean for many devices, it is fair to assume that the KitKat update might take a while until it reaches the Galaxy S4 and the Note 3 devices.