Meet the new Asus Transformer Book Duet that comes as a 13.3-inch tablet with a laptop dock as well. So far you’d say that it isn’t something that you haven’t seen before, but what if it could feature both Windows 8.1 and Android 4.2.2? Having a tablet and a laptop in one device is something common, but a dual-OS tablet isn’t a device that we see every day, so the company had successfully managed to capture our attention. Asus Transformer Book Duet comes with a 38WHr battery that can offer around 5 hours in Windows and no less than 6 hours in Android.

Its 1,366 x 768 resolution to start of up to 1920×1080 pixels offers wide viewing angles, not to mention that it offers a storage of up to 128GB in tablet or 1TB in laptop dock; and the power is provided by up to Core i7 different configurations, according to your own budget. We don’t say that these specs aren’t impressive, but far more interesting is that you can switch between Android 4.2.2 or Windows 8.1 on the fly, whether you’re in laptop or tablet mode. 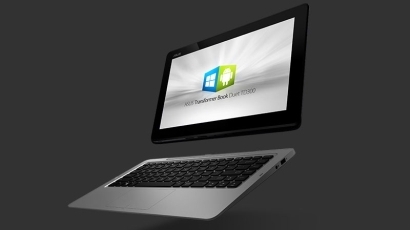 And the switching operation is pretty easy; it doesn’t matter what OS you are using as long as in both cases you’ll find a shortcut on the bottom of the screen that allows you to switch from Windows to Android or backwards. For that, you just have to tap the shortcut, wait for the dialog box to flash across the screen and you’ve already crossed over onto the other side.

But we won’t deny that despite of the build quality that is solid enough, the textured plastic back has a cheap feel, not to mention that at 4.2 pounds, this hybrid is pretty heavy even for a 13-inch laptop. And as our source suggests, it isn’t the smallest model either at no less than 1.1 inches thick.

From what we know at this point, the company plans to ship its Asus Transformer Book Duet tablet to Asia and Europe in the first quarter of the year, while the US will receive it in the second quarter. As for the pricing options, the affordable version equipped with an Intel Core i3 processor and 1,366 x 768 screen will start at $599, while the 1080p version will be priced at $699.