MWC 2014: Next-gen YotaPhone to be Priced Lower than Other Premium Android Handsets

MWC has also brought us the big first appearance for Next-gen YotaPhone and we are all curious to discover more about it. Just as it happened with the first-gen version which went on sale in Russia and select European markets last December for a price of no more than €499/$684, the company plans to release its next-gen YotaPhone for a lower price than other premium Android handsets from the current market. We like when we hear the idea of a good price, but what specs are supposed to come with it? This is also a very important aspect, so that’s exactly what we have prepared for you:

The e-ink display of this new Next-gen YotaPhone is of no less than 4.7-inches, offering us an improved resolution of 960×540, instead of the previous 4.3-inch 640×360 e-ink display; and even the front display has been changed into a 5-inch 1080p AMOLED.

In terms of power, the original YotaPhone packs a dual-core S4 Pro CPU, but this time we are talking about something even better: a 2.3 GHZ quad-core Qualcomm Snapdragon 800 paired with 2GB of RAM which will make the YotaPhone device much faster and reliable than before. Moreover, here we can also find an 8MP camera with LED flash coming along with a secondary 2MP front camera, not to mention that Yota Devices has even given the new YotaPhone wireless charging, although we have no further details about this feature at this point. 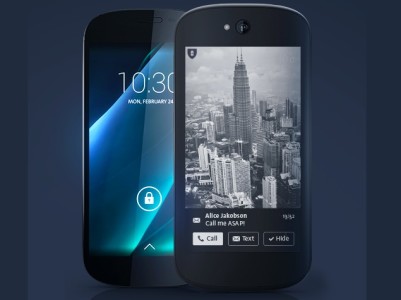 As for the OS, Android 4.4 KitKat will be there waiting for all buyers and we all know what impressive enhancements is supposed to include in its list.

As for its price-tag, we must be honest and tell you that it has not been revealed yet, but the company has officially declared that it will be 10-15% lower than other premium Android found on the market at the time it launches. So, this next-gen YotaPhone is more than promising!