This LG-D850 model number might not tell you anything right now, but things are about to change. We have heard previous rumors that this device might be none other than the upcoming LG G3 and now a User Agent Profile comes with several details regarding this LG D85. So, it’s time to take a closer look at this image that we have here, previously shared by @evleaks, showing us a part of a user agent profile for an LG device with the model number D850.

As you can see from the start, we are talking about a screen resolution of 2560×1440 pixels, not to mention the fact that it has been previously rumored that the alleged Quad HD display of the LG G3 measures no less than 5.5 inches. This means that the screen would practically have a 534ppi density, so the idea doesn’t sound at all bad for the moment. Let’s just hope that LG will also think about adding a long-lasting battery on the back of this device or we might have some problems at this chapter otherwise. 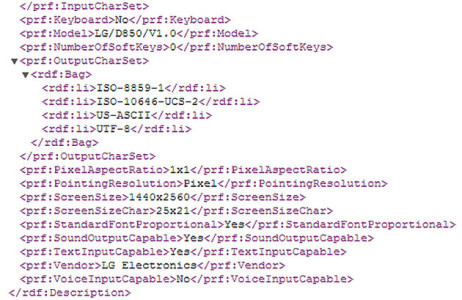 Sadly, no other details are shown in the image above, excepting the fact that attached to the image you can find the caption “Sounds like a G3 to me…”. The story makes perfect sense if we take in consideration the fact that the AT&T version of the LG G2 is also known as the LG-D800, while G2 is none other than D805 and G Pro 2 is D830. But are all these details enough in order to be sure that we are talking about LG G3?

We heard more several times before that the G3 would feature a Quad HD screen, and this new discovery is taken as a confirmation of that aspect by some. Anyway, others argue that by pointing out that another possible version of this upcoming LG G3 is the VS985, this one being made for Verizon Wireless, but nothing is known for sure. We can only tell you that LG has big plans for this handset, already considered as being company’s true flagship smartphone for 2014.