Samsung Russia is just on the verge of reporting on its Twitter account the forthcoming of a “new level of device” as Google Translate can possibly iterates, due on the 19th of March. We don’t know what exactly this “new level of device” might be, but if we take a closer look at the teased image, we might imagine a certain device coming in different colors like turquoise, pink, white, black or brown, being designated for beautiful and fancy women and not only. Might it be the presuming Galaxy NX Mini that Samsung is reportedly working on? We will see about it.

Perhaps we might be also talking about a highly-fashionable design model of the Samsung Galaxy S5 with a turquoise color for the ladies wearing bright accessories and clothes!

Others say that the upcoming “new level of device” is nothing than a mere cover or a phone case, but we couldn’t speculate on that particular matter, since the teaser image seems to have appeared just a little shorter before the official announcement of a certain Samsung device. So we will be able to tell you more on that on the upcoming hours. 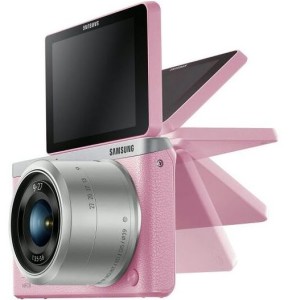 With all that, an update news from the same Samsung`s Russian Twitter account reveals the “new level of device” sporting a “slim and light” camera which might be the Galaxy NX Mini as can be seen in the image above, the device that the Korean smartphone manufacturer is reported to unveil tomorrow. The leaked info is backed by a rumored image which might be the NX mini device coming in pink, just like the one revealed by Samsung Russia.

Well guys, can you guess what it is? Is it the supposedly Galaxy NX Mini which is due for tomorrow? I am inclined to believe it is! We will wait for another couple of hours and we will see you get the fresh info! Cheers and don’t forget to write!