Well folks, here we are back with fresh news about the so alleged Samsung NX mini camera which was rumored just a couple of hours ago, soon to be launched by Samsung. It seemed that Samsung Russia indeed has posted on its Twitter account the teased images about the upcoming NX Mini, being rendered in a turquoise color and a camera at the front. Now, new leaked shots reveal a camera which resembles pretty much with that mentioned a few hours ago.

The images leaked online about the NX mini camera also came along with some specifications. As a result, the Samsung NX mini is significantly smaller than the NX1000 and the NX2000 cameras, sporting the non-confirmed yet OS Tizen that was enhanced on the NX300M camera in 2013. 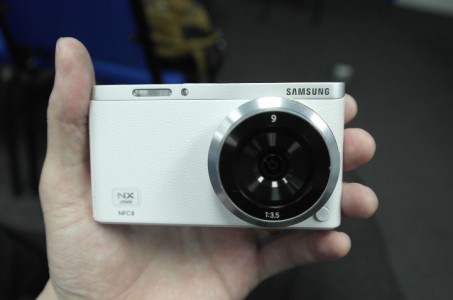 As opposed to the previous models, the NX mini camera lacks the rotary dial otherwise found on top, which used to allow switching from different various modes. Instead, the Korean smartphone maker is supposed to offer mirrorless lens that can be changed on the NX mini camera. 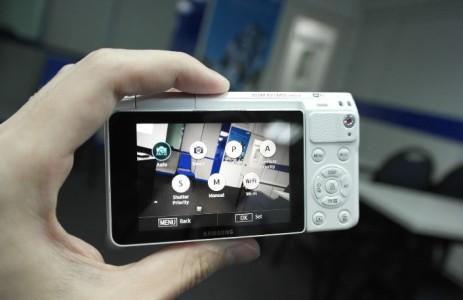 As for the lenses` specs, we might be talking about some differentiation in aperture size or zoom capability than the previous versions, since the base NX mini lens will retail for €499.

The Samsung NX mini will have a 9mm F3.5 lens, optical image stabilization, extra lens and camera carrying case and a 2,330mAh battery which can hold up to offer 682 photos with one charge. In addition to this, an extra battery will be available.

And of course, as already stated in a previous article just a few hours ago, the NX mini camera WILL be officially launched tomorrow, to be put on sales starting with April. We will come back with more details about the Samsung NX mini tomorrow. Cheers for now and don’t forget to write!