How is LG G3 acting to a Water Test?

We have all heard about a waterproof and dustproof LG G3, according to the most recent trend for top-shelf Android models which was started with the poplar Sony Xperia Z during the 2013 CES show in Las Vegas. Since then, all of Sony’s high-end Xperia phones have included the feature, just as Samsung offered the Samsung Galaxy S4 Active which can withstand being submerged in 3 feet of water for 30 minutes, as well as the Samsung Galaxy S5 model that has impressed many buyers with its IP67 certification.

Although these rumors have never turned into reality for LG G3, we are still curious to find out about the way that this handset is acting to a water test. LG G3 doesn’t have a protective seal on the battery door, a water repellant coating on the internals for accidents or condensation or a charging port cover like Samsung’s Galaxy S5, so in theory, things don’t look at all promising. 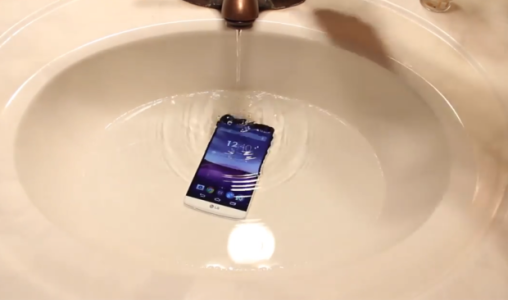 How is LG G3 acting to a Water Test?

LG G3 not was designed with this in mind, but you’ll be surprised to find out that it LG G3 handles water better than we have anticipated.

LG G3 Submerged in Water for Over 2 Hours

This image provided by ITechWorld is the best proof for that as it shows the LG G3 being submerged in water for over 2 hours. After that, the curious owner had seen that the device works perfectly fine although it has been in water for such a long time and he wanted to find out even more about its limits: he dropped it in a sink multiple times over and over again just to be sure about the result.

Once again, it seems that the handset didn’t suffer any consequences. The battery is the only which had some water under the back, so you have to remove it, but the camera, NFC, speakers and all the other elements work just fine.

So, although LG doesn’t claim that its G3 is water-resistant, it seems that its design can handle water with no problems. We hadn’t seen that coming!