Since Google officially released Android 5.0 Lollipop OTA updates for its Nexus branded devices, all the other companies are developing their own Lollipop firmwares. Thus, future OTA roll outs are being prepared in partnership with carriers and retails from around the world. The French carrier SFR decided to announce its Android 5.0 plans for the following period, so if you own a Samsung branded smartphone or tablet in France, then you might want to read the following lines.

The first to receive Android 5.0 Lollipop OTA update is Samsung Galaxy S5. SFR will release the compatible firmware this month (the exact date isn’t provided though). Then, Galaxy Note 4 will shortly follow, as the phablet will embrace Android 5.0 in early January. SFR is also rolling out Lollipop firmwares for LG G3 and Motorola Moto G, while other devices will be updated to latest Android OS next year, probably in February.

You can check other OTA releases within the image from below. 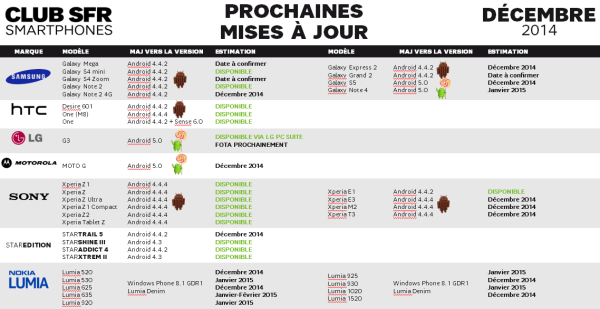 Well, there you have it; those are SFR’s Android KitKat and Lollipop plans for the following weeks and months. In order to check for software updates you just have to go to “menu – settings – about phone – software updates”. Remember to enable a WiFi connection before applying the update, or choose to download the required firmware for manually flashing the software through Samsung KIES / Odin, LG PC Suite, or Android SDK, depending on the device you are using.

Do tell us if you have received your own SFR OTA update and share other important info with our readers by using the comments field from below.