It seems that Samsung wants to be the market leader for Android devices, as the company is willing to release smartphones in every size there is. After the release of the Samsung Galaxy Mega 6.3, one of the largest smartphones on the market, a new device, which seems to be the phablet’s little brother, makes its appearance. It is called the Galaxy Mega 5.8 and it has no noticeable software differences from the Mega 6.3. However, it is a lot smaller and it seems to be a mid-range device, considering the under-the-hood changes. The handset’s design is also almost the same as the Mega 6.3.
Specs wise, we should tell you from the start that we are quite disappointed of the Galaxy Mega 5.8. The display has a pixel density of just 190ppi and it’s glossy surface makes it difficult to see in the sunlight (which I also found in my Galaxy Mini 2). The device comes with a 1.4GHz dual-core Broadcom CPU, 1.5GB of RAM, and 8GB of internal storage, expandable by a microSD card. It also has an 8MP rear camera of 1080p and a 1.9MP front one. It runs with the help of a 2,600 mAh battery, which is quite small for a device this size. There’s also a Duos model, which supports dual-SIM, as our source points out. 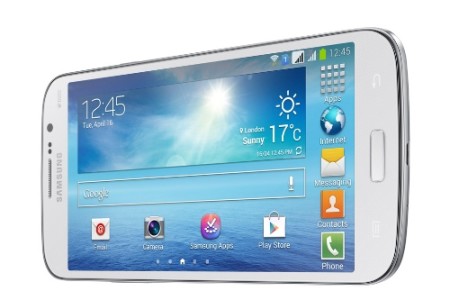 The Galaxy Mega 5.8 runs Android 4.2.2 Jelly Bean, with the latest version of TouchWiz. The price tag is close to that of the Mega 6.3, sitting around $550. We don’t know if it’s worth the money, giving the fact that none of its specs seem to be that good. However, if you’re looking for a mid-range, dual-SIM device, you might want to check it out. You don’t have to buy it in order to test it. As you all probably know, mobile retailers always offer tester-devices, especially when they are first released.