Android 4.3 leaked for Samsung Galaxy S4, a few weeks ago. Now, it’s time for the Nexus 4 to get the update. Build JWR66N is almost identical to 4.2, but settings and other changes can be noticed by a trained eye. Among changes, we can find Bluetooth Low Energy support (the connectivity wasn’t possible on low battery) and a new checkbox under Advanced Wifi settings, which allows Google’s location service to scan for Wifi networks even when Wifi is turned off and not being used for wireless networking. Additionally, by pressing menu in the phone app, you can now add two-second pauses in your dialing string (denoted by a comma) or longer waits (denoted by a semicolon).
Also, with Android 4.3, when you take a screenshot and share it via email, the Subject field is automatically populated with the date and time of the shot. Jeff Williams was able to create a system dump and backup of the ROM. The files can be restored through TWRP ​(TeamWin recovery), giving you a working version of Android 4.3 ahead of the official release, according to our source. However, we advise you to be careful with bugs. You might want to wait though, as the official release of the update is probably less than a week away (Google has an upcoming event July 24 in San Francisco, California). 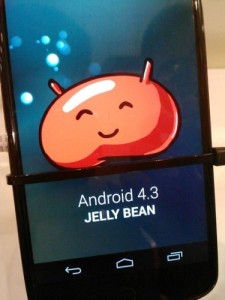 We’re waiting for the Android 4.3 Jelly Bean update in order to see what other changes it brings and tell you about it. It will be a plus for the Nexus 4, which we were telling you, a few weeks ago, disappeared from the Carphone Warehouse retailer’s site. The upcoming update might bring the handset back in stores and even grow it’s sales. We’d be happy for that to happen, as the Nexus 4 is a pretty good smartphone.