After 6 months of hard waiting, when iOS were gaming and being excited to meet it, the Walking Dead is now available on Android too. Just look after it in Google Play store and install it. It is a pity for Android user, who are always a bit put in the second line and looking to their iOS “friends” having the opportunity to test some features, apps or games sooner then they can. Coming back to our game, it can be bought for a decent price of $2.99. The release is about Episode 1 “Days gone Bye”. Users can choose their favorites character from the entire series. They can choose from Rick, Glenn, Shane, Carl, Andrea, Lori and more.

Our source narrates about how the game works. The users are challenged to mold a four team and then start to chase for supplies and update mechanism on the way. In order to survive against the walkers the users will have to pay attention to the “unique special character abilities” . The Walking Dead bonus, which comes with the release can be accessed when certain bonus are completed or when issue met in the way are solved. It is said that it includes also “behind-the-scenes trivia, Google Play Achievements and much more.” 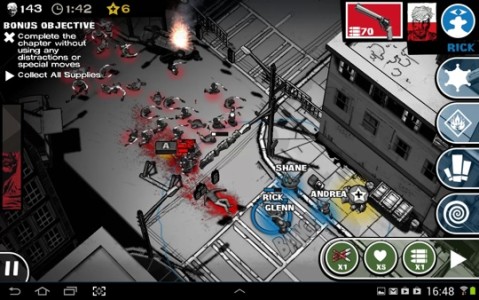 For more information and visual contact with the Walking Dead season 4 game, the TV channels made to be seen a trailer of 4 minutes and 30 seconds, but for this, are some more months of waiting which separate us . The trailer make you to be curious and anxious about seeing more than just few minutes . The wonderful time will be spent by the big fans of the Walking Dead game and for a good price they can have full fun! Simply enjoy the Walking Dead game guys!