Are you tired of seeing the same old icons on your Android home screen? No one says that you have to accept the situation, but try installing another launcher.

A good launcher has no problem when it comes to offer your Android phone a totally different appearance and feel, with new icons and themes, with new functionality and not only.

Aren’t you afraid of something totally new? Could you imagine your Android’s interface with the look and feel of an iPhone?

If the idea of enjoying some iPhone-looking launchers on your Android device doesn’t scare you, then here I want to present you a top 3 of the most innovative and feature-packed options that you can choose from.

Top 3: the Most Innovative iPhone-looking like Launchers for Android

3. Cheetah Launcher
This launcher will give you the balanced feeling of Android and iOS. The best thing about it is that it’s totally free, with no in-app purchases and that some little things are making the difference that matters. For example, the app discovers your most commonly used apps and places them on the homescreen for your convenience, it is much smoother than many other system launchers while occupying 50% less RAM and it has plenty of stylish themes which make your phone shine in an iOS way, as strange as this might sound. 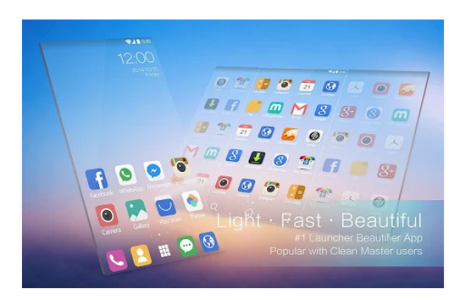 As for its other main features, you can hide inactive apps by going to App list > Menu > Hide App, you can simply long tap an app icon in order to edit the picture, quickly uninstall it, or edit its related folders, tap and drag one icon to another to form a new folder, or enter into App list > Menu > New Folder or simply enjoy various special animations like screen rotation by going to Menu > Screen Setting > Animation Setting.

2. jbOS7
Here I have another frequently recommended app that can easily give your Android’s interface the look and feel of an iPhone: I am referring to none other than jbOS7 that many owners simply consider it as being revolutionary.jbOS7 will make your homescreen and lock screen look like the iOS 7, but it is an iOS for Android. 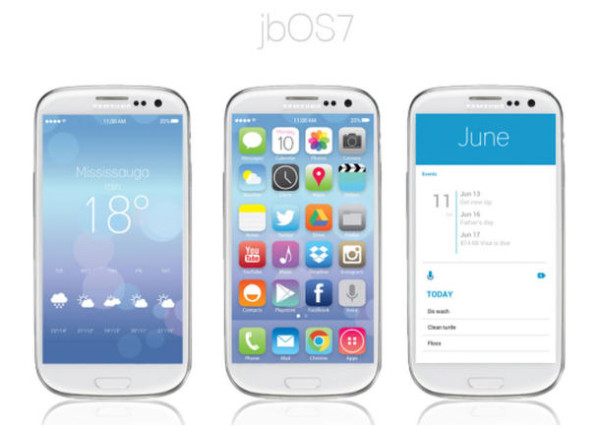 What you actually get is a clean and simple design, not to mention the fact that it also includes two uniquely designed pages for the Weather and Calendar apps. Do you want to give it a try too?

Then, keep in mind that it’s available as a Dropbox download with the help of this link.

1. Espier Launcher
Do you think of another combination of classical iOS-style and Android? Espier Launcher seems like an ideal solution to take in consideration. Some of its icons look a lot like the ones found on an iPhone’s, their sizes and layout are customizable, so is the color of the title and you even have the possibility to swipe to access toolbars, to create folders and to enjoy widgets. 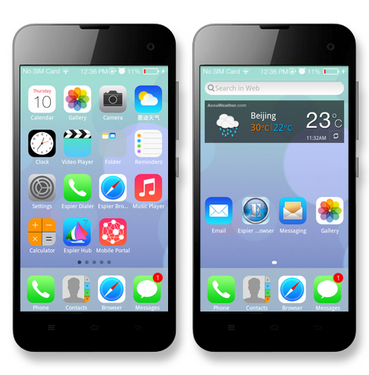 The fact that you can apply one design to a specific category of icons and not only to one icon is a major plus as well, just as the fact that there are various plugins available to extend the existing functions. Espier just released an iOS 7 theme that’s already enjoying a mad success, so don’t hesitate to give it a try!

Besides these ones, there are many other launchers and customization tools that bring an iOS look to your Android devices, so I am sure that you can find at least one which suits all your needs and expectations. Have you taken a decision? Do you know which one is it?