An image which appears to have been taken with the Sony Honami was leaked, confirming the fact that the device will pack a 20 MP camera. The photo is of a bike and it also shows data about the device it was took with. It was taken on August 4th with a C6902 device, which is probably the model number for Honami. The photo has a resolution of 20.65 megapixel, a 4:3 aspect ratio and f/2.0 aperture. The Sony Honami received GCF and FCC certification, and it is said to be released on September 30. One and a half months to wait isn’t that long for what appears to be the biggest camera smartphone on the market.
Also, according to our source, the device will be announced during an event on September 4th. It is said to be waterproof and dust-proof, so without taking a look at any other specs, I could easily say that it is a shame the device hasn’t been released sooner, to catch the summer. I bet everyone would have wanted or needed such a smartphone in their summer vacation. The camera comes with Sony G lens and BIONZ Image processing engine and a 5-inch Full HD display to watch the images on. 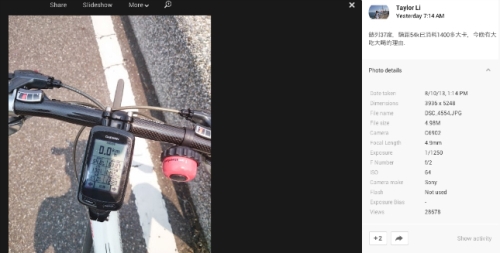 Specs wise, we’re looking at pretty much what was rumored before, and that is a 2.2GHz quad-core Qualcomm Snapdragon 800 processor, 2GB of RAM, 16GB of storage and a 3000mAh battery. What is said to be called Xperia i1 will run Android 4.2.2 Jelly Bean and, furthermore, it will support WiFi, Bluetooth and LTE connectivity. So now, having all the major specs, you can see why we are so eager to get our hands on the device.