What I am about to show you are leaked information and pictures, so don’t get your hopes too high or too low after reading it. The truth may be somewhere in the middle, as always. Following the sweet names they already used (such as the Jelly Bean version), this was supposed to be called Key Lime Pie until they decided to use the chocolate name as we know it. That could have probably been only a market strategy to avoid information leaking, but I don’t know how to explain the photo that seemed to be the Android’s 4.4 OS presentation picture. The might be part of that strategy as well or they just decided to change the name.

Anyway, what changes will it bring to the old one? It is said that they focused more on better performance that better looks. And that is quite fine by me. I mean, of course there would be some changes to the interface, but that would be minimum. One little change will affect the notification bar color scheme, which suffered a re-color from the very blue we know to white or grey. A screen shot from the Play store confirms it. The icons and the buttons seem to be a bit stiffer as well.

First of all, Google switched the workplace from Linux 3.4 to Linux 3.8. That should lower the system’s memory usage for better performance. Of course, the Nexus 5 (which will have this OS implemented) won’t miss a decent amount of RAM, but that can only bring us joy. 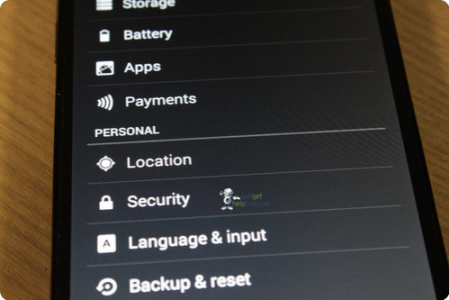 As I said, more changes are noticeable. There are some new applications and some new features in the Settings panel, like Payment and Printing. The Payment is a way to manage payment options, more like a Google Wallet, but that’s just a guess of mine. It is more likely that Google wants to surprise us with something. The Printing thing, well, it offers the user more things to print, by adding the button (and the option) almost everywhere in the phone.

There were also improvements for the camera. Other than developing a new and better camera application (which will allow us to take better photos/recordings), new photo manipulation tools were added. Tilt-shift, Center Focus, Negative and Posterize effects surely will give us more fun times with the pictures we choose to alter. Another app was added, one that will make posting pictures on Instagram considerably easier and faster.

I believe Android 4.4 KitKat will surprise us with it’s features and performance. In a good way.