Do you want a new tablet for your kids? Well if so, then you will be able to buy the new edition of the Galaxy Tab 3 as Samsung just made available the US release date and pricing offers. So, we have the first tablet that is designed for kids offered by a huge manufacturer as until now only “local” companies were developing such devices.

Anyway, if you are thinking in surprising your kids with a new gadget, then the Galaxy Tab 3 will be perfect for you, though the price tag is a little bit too expensive if you ask me. The tablet has been announced back in August when we have received the fir info about the future kids-dedicated Tab 3. The specs and features are similar with the ones spotted on the classic Tab 3, though on the redesigned model you will find some kids-features, apps and games.

Actually, the Kids Galaxy Tab 3 will feature two mods, the regular one and of course the kids mode. The Android OS is still 4.1 but the UI is more intuitive and easier to use even for a kid. Furthermore, on the new tablet there are installed dedicated apps, games and features like Learn ABCs, 123s, Kids Planet Discovery, Fruit Ninja, Disney’s Toy Story: Smash It! and lot more.

The tablet also comes with some parental controls that is quite useful especially when thinking that you kid can spend the whole day playing on the new Galaxy Tab 3. So, you will be able to limit the time your kids can play, limit the mode switching to those with the PIN and set different restrictions for ensuring that the youngers are not having access to inappropriate content. 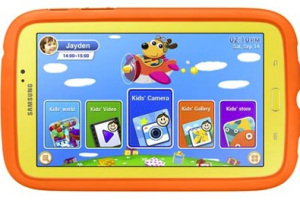 The Kids Samsung Galaxy Tab can be pre-ordered in US started from 1st November. The handset can be ordered from Samsung, Amazon, Best Buy, Office Depot and several other major retailers. As for the price tag, if you want to buy this redesigned version of Tab 3 you will have to spend around $229.99. So, what do you say, will you consider in buying the Kids Tab 3?