The Nexus channels worldwide have recently spread the word that Google launched its Android 4.4 KRT 16S Bugfix Update, which would bring significant changes in the way Nexus devices will operate in the future.

Conley Owens, the reliable software engineer from Google stated that the KRT 16S includes bugfixes updates for all relevant devices such as Nexus 7 2013 (the Wi-Fi and the mobile versions), Nexus 4, Nexus 7 Mobile and Nexus 10. The Nexus Corporation has already added binaries, AOSP Code and Kernel Source for these updates. 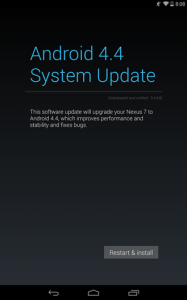 The source also states that Google has come up with factory images for the Google devices that received the Android KRT 16S Bugfix update. But there hasn`t been a released date of the bugfix update for the Nexus 7 3G and Nexus 4 yet; in this case the engineers from Google might come with a newer and fresher version.

Click the link from here to see the factory images for the above mentioned Nexus handsets.

We do not know exactly what the most recent bugfix built has brought fresh, but let`s hope that the feedback from millions of users will help Google to rule out all the flaws Android 4.4 KitKat might come with. With this odd situation to be confronted with, an audio bug was discovered on Nexus 5, a device which did not receive the update. That`s quite strange, isn`t it?

Other than that, there could be a reasonable proof of an important update for your Google smartphone, meaning that the handset might ask you to log in with a backup account in case you have several Google accounts on your phone.
We will further dig in for new information and we will surely brief you on any significant changes. Until then, make sure your Nexus devices run smooth and perform at its full capacity. After all, this is why they were built for.