Several l leaked images have just revealed us what it seems to be a new limited Sony Xperia Z1 edition. As we all know, the handset is launched in just three color options: white, black or purple, but here we have one of the first pics presenting us a red Sony Xperia Z1. We still don’t know what to think of them as long as Sony hasn’t officially confirmed that it might be preparing such a model, so there are pretty big chances to deal with some faked photos, a simple joke or indeed a rumor not yet confirmed.

We know as well that Sony has promised the Android 4.3 update for Xperia Z1 in December and also confirmed that it is thinking about releasing the Android 4.4 KitKat soon after, so things get even more confusing. Among those leaked images that we have told you about, there’s also a phone screenshot which shows us clearly that the device is actually running on Android 4.4.2 KitKat. 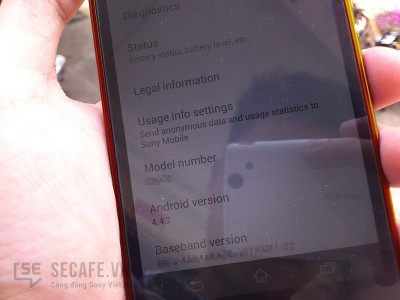 You can only expect that the model number and baseband is pixelated for obvious security reasons, but it still sounds pretty strange thinking that we haven’t even seen Android 4.4.1. Maybe is once again one of Sony’s strategies to capture everyone’s attention ( and we must admit that they are doing a great job with that ), or they are simply delaying an official announcement due to the fact that this is just some kind of a test version and not the latest product.

Or it is all about testing our response to a new red color option in order to avoid any unpleasant later surprise, as our source is also suggesting. We already have three different choices, so how many of us would actually change their opinion regarding this device by simply taking in consideration a new color and no different technical specs? We’ll just have to wait and see that.