Why Apple replaced iPhone 5 with 5c

As you probably know, until now, Apple’s policy was to keep its previous iPhone model on the market and selling it at a lower price, when releasing a new model. But when they launched the 5c, they stopped making the iPhone 5. The reason came clear: the manufacturing of an iPhone 5c is $20 to $30 cheaper than that of the iPhone 5. Furthermore, the selling price for the two devices is similar, and the crisis hits everyone, regardless the funds, so the company decided to save some money. We can’t judge them. After all, the iPhone 5c is one of the best smartphones we’ve seen so far.
Also, according to our source, Apple is not worried about how sells are about to go in the future, considering that they sold over 9 million devices in the first weekend after launching the 5c and 5s. The price tag for the 5c is the same as for the iPhone 5: $99 for the 16GB version and $199 for the 32GB version, for a two-year contract. The device is the same as the iPhone 5, the case being different: a colored plastic shell. It comes in green, white, blue, pink and yellow and the shades are just loveable. 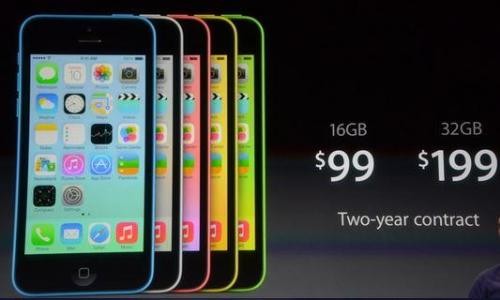 Specs wise, the iPhone 5C features a 4-inch Retina display, an A6 processor, 8MP iSight camera, backside illumination, a new FaceTime HD camera, 802.11 a/b/g/n 2.4Ghz and 5GHz dual band wifi, Bluetooth 4.0. It comes with a built-in rechargeable lithium-ion battery, which is said to last up to 250 hours in stand-by. A box of “goodies” contains the iPhone 5c with iOS 7, Apple EarPods with Remote and Mic, Lightning to USB Cable, USB Power Adapter and Documentation. The iPhone 5c is available at AT&T, Verizon, Sprint and T-Mobile. If you enjoyed the iPhone 5, you’ll love the new candy-colored model. And if you don’t, it’s still the only variant left.