We always tend to put our faith in what Verizon promises, but this time we are going to tell you about an unexpected situation which doesn’t apply to this rule. Months ago, Verizon had posted about an upcoming update for the popular HTC Droid DNA handset (the Android version), but we hadn’t heard anything for a long while. All this time we had plenty of things to be preoccupied with, but we still haven’t forgotten about this post. Finally, Verizon has started pushing out an over-the-air (OTA) update to all its Droid DNA devices from the United States ready to bring us the latest build of Android 4.2.2 Jelly Bean and Sense 5.

So, a notification will appear on your device, asking you to download and install the update, but if you haven’t received this over-the-air update yet and you have no more patience, you can manually search it by going into “Settings,” then into “About Device,” and selecting “Check for Updates”. 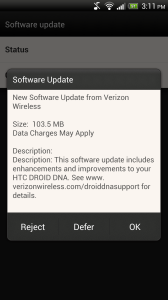 This update will come with a variety of bug fixes and improvements and in order to convince you, we’ll name just some of them:

Be careful about the fact that there are two different updates being sent to your device, as our source mentions. Only the one having the 3.06.605.4 build number will bring you the actual update, while the 2.08.605.1 710RD one will come just with some minor changes.