ASUS chairman Jonney Shih has unveil the Memo Pad HD 7 at the Comuptex 2013 event. ASUS  is planning to sell the Memo Pad HD 7 for a good price, witch is $129 for the 8GB version in developed countries, and there are rumors about a 16GB version, that is thought will cost around $149 when it will be ready for selling in US. There is little difference of price between Asus Memo Pad 7 HD and Google Nexus 7 which is also an ASUS product (about $50 ), but unlike the Nexus 7, this one has a microSD card slot for extra storage. 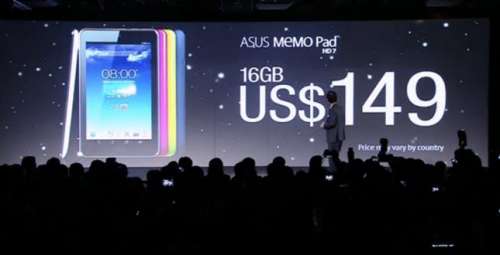 Memo Pad HD 7 weighs same as the Ipad-Mini – 0.6 pound, and will come in 4 different backside colors: dark grey, white, pink, and something that resembles like turquoise but in their opinion is called green. The tablet includes a protective TransCover with microfiber interior, that can be used also as a stander to put the tablet at the perfect angles for watching your favorite videos or for an easier way to type with the on-screen keyboard. The available colors for the TransCover are: blue, pink, white and black.
Asus Memo Pad 7 HD can be a good choice for the ones who decided to own a last market apparition in the world of the tablets and also for the ones who wants a good performance and a nice look.