Those who already have a Google Nexus 7 tablet will be pleased to know that, just two weeks before Christmas, the Google team thought to them and made a new version of Nexus 7 2013, with a beautifully white color. Yes, you heard well, a white Nexus 7 which looks similar to the summer version, but without a LTE version or a 16GB capacity. In fact, the Wi-Fi 32GB configuration is the only option and it looks more like the white Nexus 5. The hard plastic coating or soft one from the black model of Nexus 7 isn’t a sure thing.

Our source revealed that white version of Asus Google Nexus 7 (2013 version) is already available in the United States and can be ordered from the Play Store, in the United Kingdom is listed under “coming soon” message and in Japan. You can buy it for just $269.99, and you can have even a Chromecast stick because you will receive a $35 credit in Play Store. As for the design, Nexus 7 white flavor has the same standard black style while the back has a new alternate color. Now it depends of your needs, but it’s the best deal and it worth order it now as it is a limited supply. 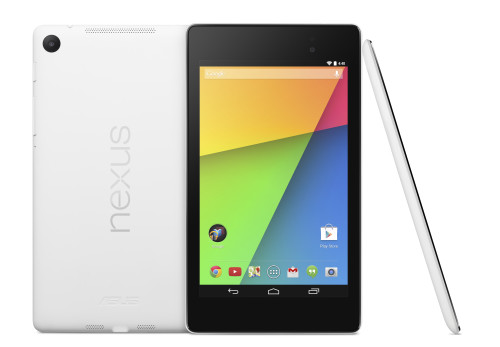 White Nexus 7 is waiting to be bought

The reaction of the direct competitor was immediate, LG G Pad 8.3 inch Google Play edition ( around $349) and Sony Xperia Z Ultra Google Play edition being announced for the near feature. More, Google is selling a brand new folio case for Nexus 7 with a native adjustable kickstand – an interesting combination of polycarbonate with soft elastomer. It has two types of configurations, and activate the sleep function automatically when you close the cover. The price is good, just $49.99, and the colors available are black or bright red which give Nexus an awesome funky look.

So, after six months, Nexus 7 ( 2013 ) is one of the most interesting and full of modern features tablet on the market, the white version being just a new way of thinking the future…