Samsung has just announced a new version of its Galaxy S4 and Galaxy S4 Mini handsets as being on the way. We are talking about Black Editions of both these smartphones using a dark black front and a faux leather rear cover that already seems very familiar from the popular Samsung Galaxy Note 3. And we must admit from the start that they look more than interesting, just as you can see in this photo, so there is no wonder that the company wanted to add this version too. Black is not actually a color, strictly speaking, but more a symbol of formality and elegance and who wouldn’t want that? If you are interested on any of these new versions, here we have more details for you:

This news is about a major change for both Galaxy S4 and Galaxy S4 mini, but remember that we are talking about an external change, while the specs generally remain unchanged. 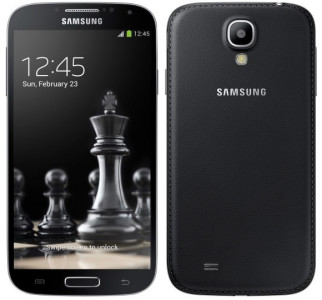 When it comes to this Galaxy S4 Black Editions, its technical details are the same as the I9505 including a 5-inch full-HD screen, 2 GB RAM, 16 GB internal storage, as well as a 13 MP camera; but we can find here a Snapdragon 600 processor version with a 1.9 GHz quad-core Krait 300 CPU instead of the updated Snapdragon 800.

That goes for the Mini version as well, as long as it packs the same 4.3-inch qHD screen as the original version and gets the power from a 1.7 GHz dual-core Snapdragon 400 processor paired with 1.5 GB RAM and 8 GB internal storage.

From what we know at this point, Galaxy S4 Black Edition will hit Russia no later than this month for a price of RUB 23,000 ($660), while the Mini Black version will obviously be much affordable at RUB 16,000 ($460). But as our source confirms, these Black Edition smartphones are exclusively listed on Samsung’s Russian site, so we cannot guarantee that Samsung will bring them to any other markets.