As our source mentions, the Korean smartphone manufacturer has been trying to update all international Galaxy S4 devices with the Android 4.4.2 KitKat, and unofficial sources confirmed that the firmware has already hit the European market before the US, under AT&T. This was also the case of the firmware being released on Note 3. 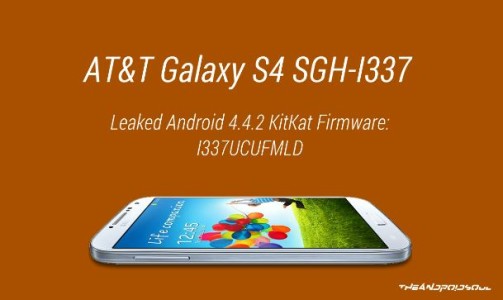 More than that, the Android 4.4 KitKat update will have the same enhancements on the S4 as it has on its Note 3 flagship, for all international models, no matter if they are under the AT&T, T-Mobile or the European carriers.
The Android 4.4.2 I337UCUFMLD leaked for the AT&T carrier will be flashed just like any other ROM. Find below how to safely download the S4 Android 4.4 KitKat.

To successfully install the update, you will have to hit the source button and download the I337UCUFMLD ZIP file, which is around 1.51 GB. Then, you have to connect your S4 to your computer or laptop, using an USB cable and launch Odin. Next, load the ZIP file in PDA/AP and click start.

There aren’t any significant changes, apart from some a transparent status bar icons, which come in white. The update will also come with a fresh-new immersive mode and new printing options. Enjoy the download!