Facebook updates its application for Android phones, since it’s been having quite a few problems since its release. The update promises a smoother, faster app, but we already heard such things back in December 2012, when Facebook for Android v2.0 update promised to be twice as fast as the previous version. However, improvements have been seen with the Facebook Home launch, in April 2013, although Zuckerberg and team promised, at the time, that monthly updates will be made. Facebook sustains that it’s working on performance and gaining Android users’ trust so that might mean updates will arrive more often, from now on.

According to our source, the Beta has been launched June 27. I haven’t personally tested it yet, but I’m really curious regarding improvements so it’ll be the first thing I’m doing when I get home, so later on we’ll be able to exchange opinions. Comments I’ve read so far are both positive and negative, so the best way you can find out how it works it’s by testing it yourself. Facebook for Android smartphones is a great way of keeping in touch with friends, sharing interesting stuff or finding out news, places to go and many more. 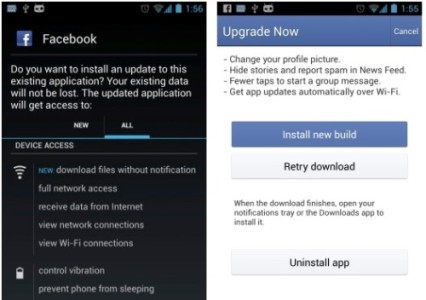 The application update comes with a menu option, which allows users to submit bugs that couldn’t be noticed until the program was released, in order to help future updates. This means that each one of you can speak out about what’s bothering you about this program, so feel free to test it and send your feedback.