Both single and dual-SIM Sony Xperia E1 versions are now available in India for a price of at INR9,990 (€118) and INR9,750 (€115) respectively. We can notice from the start that we are talking about a small price difference between these two models, so we strongly suggest to choose the dual-SIM Xperia E1 variant thanks to its advantage. As for the other included specs, it is obviously from the start that this Xperia handset is only placed in the budget segment in 2014, but it is at least decent enough for those having a limited budget.

Sony Xperia E1 comes with a 4-inch multi touch capacitive display with a resolution of no more than 480×800 pixels (translating to a modest pixel density of 233 PPI), while its 1,750mAH battery giving it a talk time of up to 8 hours on 3G. 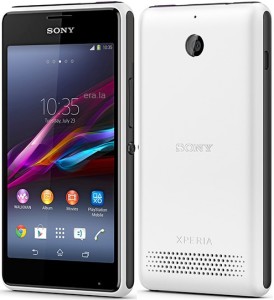 TheSony Xperia E1 device also gets its power from a 1.2GHz dual-core Qualcomm Snapdragon 200 processor accompanied by 512MB of RAM and 4GB of storage (from which only 2GB are available to the user), but the good news is that its allows memory expansion up to 32GB using micro SD cards. When it comes to its 3-megapixel camera, you should know that the company promises decent photos. It is true that this camera comes with several image editing tools such as Digital zoom, Smile detection, Digital image stabilization, White balance presets, but its resolution cannot be changed. And the fat that it doesn’t include Autofocus and LED Flash is more than disappointing as well.

We all know that such a budget smartphone doesn’t offer too much high-end specs, but at least this Sony Xperia E1 comes with Android 4.3 Jelly Bean operating system (there are no KitKat details up to now).

The Indian availability isn’t what you have expected to hear? Then, you should know that Clove UK has listed the smartphone on pre-order for £135, but the official pricing isn’t confirmed at this point; even more, Xperia E1 should be reaching Europe this spring as well, but we’ll keep an eye on things and let you know more about its availability and price in the near future.