We have just told you about HTC’s Desire 816 and Desire 610 pre-order prices in Europe, but what about China? Are you curious to find out what was people’s reaction to this HTC Desire 816 phablet? You’ll be surprised to find out that over a million people already registered their interest to buy the devices, which proved to be an unexpected situation for the company as well. HTC only had 50,000 units available and it seems that all of them have managed to found an owner in no more than 10 minutes.

A next stock of Desire handsets

Given the circumstances, many people had issues when trying to order their own Desire 816 or when trying to complete the transaction, but now we all know that this has happened due to this limited stock. The demand seems to have surprised both HTC and the online retailer handling these sales, but don’t you imagine that they aren’t doing anything to solve the problem as fast as possible. 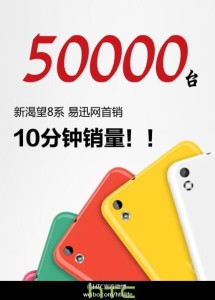 As we can find out from HTC’s official Weibo account, it seems that the next stock of Desire handsets will hit the virtual shelves no later than this March 21st at 10:00, so if you live in China and you are also interested on this HTC Desire 816, this might be your chance to have it.

Why is it so successful?

If you want to know why HTC’s mid-range device is so successful, we can only tell you that its specs are modest, but decent enough for a price of no more that CNY 1,900 ($310), so this is probably the main reason behind people’s unexpected reaction.

This HTC Desire 816 is an Android-based smartphone that comes with a 5.5-inch display with a 1280×720 resolution, also housing a 1.6 GHz Qualcomm Snapdragon 400 processor. Moreover, it lets its users enjoy the benefits of an 13.0 MP rear-facing camera and 5 MP front-facing camera as well, not to mention that it runs on Android Jelly Bean OS version.