If you are tired of contracts with the phone companies, we have good news for you: the Samsung Galaxy S4 Active is now available SIM-free, for £494.98, at Unlocked-Mobiles. The first carrier to get its hands on the waterproof device was AT&T and this happened late last month, as the S4 Active was just officially presented on June 20 by Samsung. The smartphone is similar to the Galaxy S4, the company’s best so far. Additionally, it can get wet and still work so that is fantastic. It actually has an Aqua mode for underwater pictures and videos. There are also some bad news, like an 8MP camera versus the 13MP one on the original version.

Speaking about the bad, we should also mention the slightly worse display (TFT LCD versus AMOLED), in order to carry on to the good part. Specs wise, we must mention the 1.9GHz quadcore processor with 2GB of RAM, 16GB of storage and a MicroSD slot. As we told you in a previous article on the device, the Galaxy S4 Active features Android 4.2.2 Jelly Bean and supports WiFi and LTE connectivity. The secondary camera is a 2MP one. The device also comes with and a 2600mAh battery. 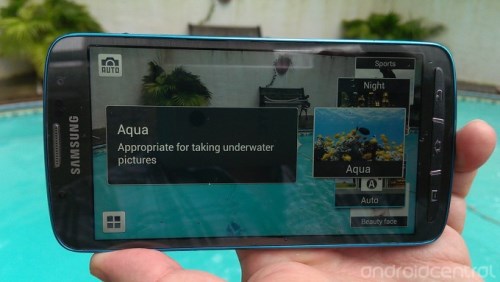 According to our source, the price offered by independent retailer Unlocked-Mobiles is lower than the average asking price for the regular Galaxy S4. This means you’ll get a better phone for a smaller price, though we are talking about the SGS4 Active here! How great is that? The S4 is a more robust device, which makes it easier to handle, but the door over the USB port is annoying, yet necessary. The biggest difference is the inclusion of three physical buttons, instead of just a physical home button. The S4 Active is also dustproof, but for a more secured use in both dust and water, make sure you properly set the battery cover. Enjoy your smartphone!