According to leaked images and to rumors, ZTE might soon release the U988S, which could be the world’s first Tegra 4 Phone. The Jelly Bean based phone will apparently have a solid plastic shell and capacitive buttons. It will also feature the latest internals from NVIDIA. The name of the device will probably change, but we don’t know yet what it will be. From the leaked images, it appears that the smartphone is going to come in bright red color scheme so far. Some say that it might first be available in China, and later on, in the rest of the world. We are hoping to see it sometime soon.

Our source talks about some specs, although we don’t know everything there is to know about the ZTE U988S. We’re about to be looking at a 1.8GHz Tegra 4 processor and 2GB of RAM, a 13MP camera with a flash, and also a 2MP front facing camera. It is rumored to be equipped with a SD card support and a 1080P display. The ZTE U988S might feature Android 4.2.1 Jelly Bean. The reported dimensions are 144 x 71 x 9 mm, and the weight at 148 grams. The sides show a volume rocker, power button, and perhaps a camera button. 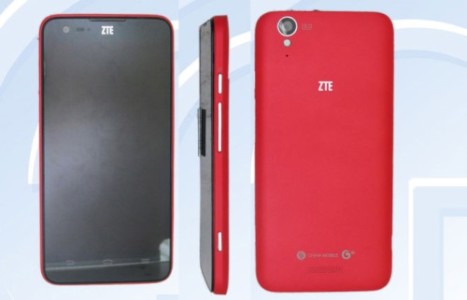 The price for the ZTE U988S is said to be of 320$, which might be a little bit to much for this type of handset, if you ask me. But then again, everybody decides what he or she expects from a smartphone. We haven’t heard anything about the launch date, nor the location so we’ll keep an eye on news and let you know immediately. Nevertheless, it’s worth waiting, if only out of curiosity, for the real specs and the actual name of the ZTE U988S. Don’t you agree?