MediaTek announced the world’s first 8 core processor, this weekend. It is even said that it might surpass Samsung’s Exynos 5 Octa chip, announced at the beginning of 2013, which utilizes big.LITTLE technology with only four Cortex-A15 cores and four Cortex-A7 cores. So this means that the Exynos 5 can only activate half of the cores at a time, while MediaTek sustains that its processor will be able of using all of them simultaneously. With this, you will be able to enjoy heavy web downloading, gaming, high-quality premium video viewing or other types of rigorous multitasking, without having your battery dead in an instant.
According to our source, MediaTek claimed that True Octa-Core chip is able to intelligently allocate processing power on a per-application and even on a per-task basis. No specifications of the new processor yet, although rumors say the clock speeds will be around 2GHz. No word on the release date either, but it’s definitely worth waiting as long as it takes. Until it’s out, let’s see an image of what an 8 core processor means, and some of the features. 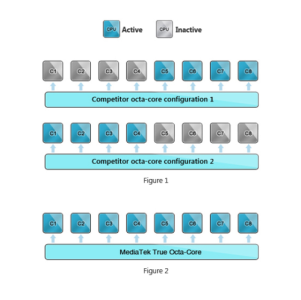 With the MediaTek True Octa-Core, you will get improved current-application experiences, like: