Nexus 5 ? Maybe, maybe not. We don’t actually know for sure if that will be the name of the device which will succeed the Nexus 4, but we will go with the tradition. Google stands up to the standards by introducing us to a new interesting smartphone, which is so far shrouded in mystery.  It is expected that more official information will be revealed at the special press even on Oct. 14, as the International Business Times has announced.

It is safe to assume that this is Google’s response to the other big companies releases. Looking at the unofficial specs for LG Nexus 5, we see a competitive Quad-core 2.3 GHz Krait 400 CPU accompanied by a Qualcomm MSM8974 Snapdragon 800 chipset. But the big event is that the handset will feature Android 4.4 KitKat OS, which we know little about. Actually the details about Android 4.4 KitKat are so few that we are not even able to decide on a interface we should expect.

Some pictures of this new phone were taken, although they are not 100% genuine to be official,but it should look like this. 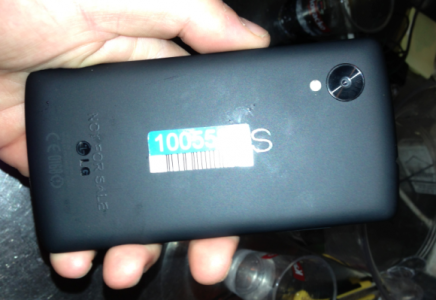 Other fancy features are listed: a true HD IPS Plus capacitive touchscreen, 16M colors, 1080×1920 pixels display, 5 inches large. Also the ‘ we-think-it’ll-be-called ‘ Google Nexus 5 will have a Non-removable Li-Po 2300 mAh battery, which will provide a long life duration, able to maintain an intense usage. Not only better as performances it will be thicker than LG Nexus 4 (about 68.2mm wide) and slightly shorter than its younger brother (131.9 mm long).

Other useful features such as GPS (A-GPS support with GLONASS) and document viewer / editor (Word, Excel, PowerPoint) , Maps, i-PDF Reader applications (and more) are pre-installed. The data does not show that a radio will be equipped, but considering the possibilities that this phone has to offer it is hard to believe that kind of feature can’t be installed.

The phone is expected to arrive in October, more likely in the second half. More information about it will be revealed in the weeks to come.