Verizon Moto X Via Moto Maker Available For Only $49.99

What do you think about buying Moto Maker from Sprint, T-Mobile or Verizon customers for a price of no more than $99.99 with a contract? It is fair enough given its specs and it definitely won’t empty your bank accounts, but we have even better news for all the Verizon customers who want the new Moto X. They just have to place an order through the Moto Maker site and we are already talking about a new price of just $49.99 instead of the regular $99.99 one. We wonder though about the main reason of this major price cut. We think that it has something to do with the fact that the company has not managed to sell as many smartphones as they have expected since its launch, so why not trying a new approach for its possible target?

If you don’t remember its main technical specs, here we are to tell you that it features a 4.7-inch Super AMOLED 1280×720 pixel screen and gets its power from a Qualcomm Snapdragon S4 Pro processor. When it comes to its 2200 mAh battery, we have to tell you that it is able to offer a talk time of no less than 13.00 hours, which sounds good enough at this price point. 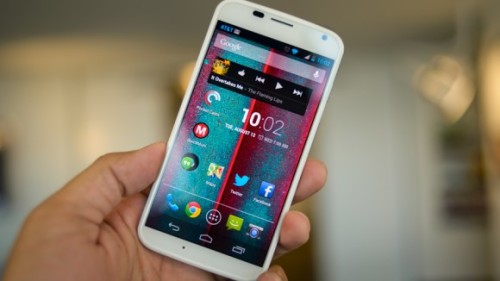 And we also have to remind you about the fact that Moto X is equipped with a 10.5-megapixel camera which features Moto’s Clear Pixel technology, while the secondary 2.1-megapixel front-facing camera here included is ideal if you use video-calling frequently.

Are you thinking about buying it, but you don’t know exactly how to do it? Then you should also know that it is easier than you are expecting as long as you don’t need any sort of coupon, singing into a special promotion or anything like that. You just have to go to the Moto Maker site, either directly, either via Verizon, but be careful as long as you don’t have too much time left to decide if this Moto X device is just what you need. This offer is indeed limited to no later than November 18th.